After the bear market rally in July was extended for the first few weeks of August, Federal Reserve Chairman Powell used the Fed’s annual Jackson Hole symposium to clarify the Fed’s position on future rate increases.

Powell was clear that there would be no “Fed Pivot” until improvements in the inflation rate are sustained.

He acknowledged the costs of reducing inflation. Slower growth, higher interest rates for consumer loans, and a softer labor market are all part of the ongoing reality.

The Fed’s priority is to avoid entrenched consumer expectations of higher inflation, which partly caused the runaway inflation of the 1970s. The Fed needs to act decisively to bring inflation down quickly, which Powell described as a “forceful and rapid” approach to rate increases.

Let's get into the data:

What Does All of That Data Add Up To?

The Fed still maintains that it has the wherewithal to bring inflation down by slowing growth just enough to avoid a "hard landing." This would allow it to goose the economy by pausing or increasing rates at some point in the near term. How “near-term” is defined is the question. The Fed Pivot that implied a rate increase in mid-2023 or sooner is one reason for the positive equity performance over the summer.

Powell very deliberately squelched that hope with his remarks in Jackson Hole and was clear that even if the environment is recessionary, the Fed will continue to raise rates if necessary to curb inflation.

The August jobs report that showed a still-strong but loosening labor market, in which wage increases are slowing and average weekly hours worked are declining, is the “just right” result that the Goldilocks Fed is looking for. On the supply side of the inflation equation, supply chain pressures are finally beginning to moderate. This could also provide a helping hand to the Fed.

The problem is that Powell's acknowledgment that containing inflation will be painful is all too real. Inflation is still high, and the fear of recession is still a wildcard that the Fed can't control, which impacts future consumer spending. In the story, Baby Bear is the one with no porridge and a broken chair.

Chart of the Month: Consumer Spending Still Chugging Along

Consumer spending is the economy's engine, and it increased by $23.7 billion in July despite falling energy prices. Inflation is not slowing spending, and that's also a sign of consumer sentiment that inflation may fall in the future. 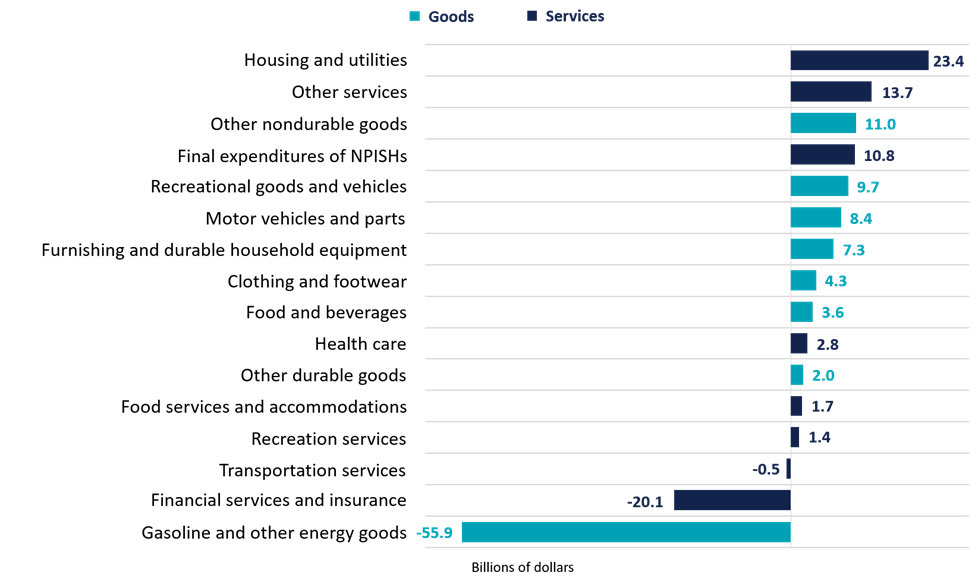 Even with the negative performance in August, the indices are above the mid-June bottom. The Dow and S&P are 6.3% and 8.7%, respectively, above their lows. The Nasdaq is 11.8% above its low. If CPI comes in lower and the Fed moderates on rate increases, it may be helpful. However, September is traditionally the worst month for the equity markets.

The reality for investors is that the Fed is being very clear it will not bail out the equity markets anytime soon. The Fed is going to keep going until signs that inflation is definitely trending down are in place. Inflation fell last summer, too – and then trended back up in the fall and winter. The Fed wants to avoid this at all costs.

Within this framework, the markets may react positively to signs that inflation is dropping and that the labor market is loosening. Eventually, supply and demand will reach an equilibrium that allows the still-positive aspects of the economy to throw off the threat of sustained inflation.

What can investors do to keep their own goals on track?

The benefit of proactive financial planning is that there are moves investors can make and opportunities that arise as the economy moves into a new phase.

While September has a history of being a difficult month for the markets, the fourth quarter has a better track record. And don’t forget about the Santa Claus Rally!

I mentioned in my last email to look out for the new blog I’m launching for financial planning and investment education.  Well here it is!

Please feel free to share it with any friends, family members and business associates looking for financial planning and investment education that cuts through the noise on TV.

The information contained herein is intended to be used for educational purposes only and is not exhaustive. Diversification and/or any strategy that may be discussed does not guarantee against investment losses but are intended to help manage risk and return. If applicable, historical discussions and/or opinions are not predictive of future events. The content is presented in good faith and has been drawn from sources believed to be reliable. The content is not intended to be legal, tax or financial advice. Please consult a legal, tax or financial professional for information specific to your individual situation.